As awards season reaches its climax, many critics have lambasted the institutions handing out their prizes for their lack of diversity. Even after years of token acknowledgements seeking to show a more ‘diverse’ side of the Hollywood elite, little seems to have changed – so as the filmmaking establishment toots its own horn for its ability to admit cinema does exist beyond the English-speaking world by handing Parasite an Oscar, it seems appropriate to revisit an article I first penned six years ago discussing fellow Best Picture winner 12 Years a Slave.

There are few crimes in human history that are as sickening, depraved and loathsome as slavery. Countless millions lived, worked and died in bondage, generation after generation. Over 150 years after its abolition in the United States, its poisonous legacy can still be felt – even after two terms of a black President impotently pontificating from the Whitehouse, like so many white men before him. Why then, is a subject that has affected so many lives, so difficult for American film-makers to address adequately?

There is, it seems, something about the subject that simply doesn’t fit with the grand ideological narrative modern Hollywood is accustomed to. The contradiction in terms of the land of individual liberty being built on the bloodied, scarred backs of millions in bondage seems to flummox even the most well-heeled auteur.  For decades US cinema has wrestled unsuccessfully with the issue, and has usually fallen back on two staple responses. The choice is traditionally between a complete air-brushing (best exemplified by the Western genre); or a mawkish faux-history that milks liberal guilt during award season – which I shall here name ‘The Spielberg technique’.

Both methods reconcile American history with American ideology, glossing over the rift between the dream and reality. More obviously in the case of the great historical white-wash, simply ignoring this shameful chapter in America’s story allows for gallant, rugged pioneers to stride through the past, living the American dream, untroubled by blood-stained reality. Perhaps the best example of this is John Ford’s ‘epic’ How the West was Won (1962), which follows four generations of a family as they spread across the West. It features chapters on the Civil War through which slavery was ended – but features not a single black actor, or indeed any mention of slavery. In fact, within the Western genre in general it remains something of a glaring omission – with notable exceptions usually coming in the form of satires. 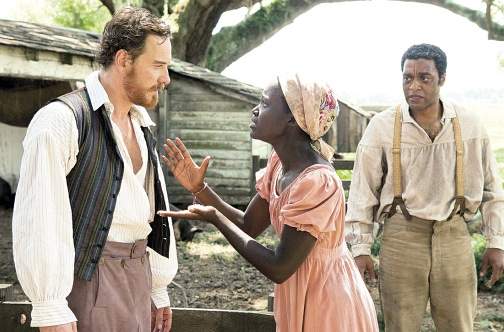 Mel Brooks’ acerbic Blazing Saddles (1974) and Quentin Tarrantino’s  Django Unchained (2013) come nearly forty years apart; both making an overt attempt to satirize the racism obscured by Hollywood myth-making regarding the West. Yet between these examples, can you honestly name a mainstream picture featuring both cowboys and slaves in any meaningful capacity? It’s as if the two appearing together would irreparably shatter a comforting illusion that all individuals will obtain justice, if they just roll up their sleeves and strive harder.

And then there’s the Spielberg technique, as exemplified by Amistad (1997) and Lincoln (2013). Slavery exists here, but not to depict the evils men commit in the name of profit. Rather, it is reduced to the role of sentimental spectacle, complete with moving speeches about ‘dreams’, ‘freedom’, and tear-jerking E.T. soundtracks from John Williams. This doesn’t serve to show how slaves might be equals with free men, instead it eulogises their suffering, in order to provoke kindly whites to save them – reconciling slavery’s legacy with the current status quo once more. It’s about being a good enough piece of property to earn your liberty, rather than fighting for and obtaining it yourself.

It’s proven a potent method during the start of any year too, as the great white suits begin pondering who to lavish with gold and acclaim. The Spielberg technique not only serves to provoke a little guilt in judges, suggesting they might still have some starved, deformed semblance of a soul remaining, but the method also reinstates whites as the heroes of the hour, making them feel superior again! “Look at how dignified the slaves are as they beg John Quincy Adams for help in Amistad! And how gracious he was to oblige them!”

The result then, is not to build slaves into sympathetic characters desperate enough to take action; thereby inspiring the audience to support and participate in bettering the world in the here and now. Instead, rather disturbingly it transforms the very degradation of slavery into a commodity to make easy sales in award season. Perhaps, in an industrial sense, that’s understandable considering the majority of successful critics and directors – and most importantly those with their hands on the industry’s purse-strings – are white men. Whilst the odd example will attempt to blow well-versed mythology apart and expose institutional inequalities still plaguing society today; there broadly remains a blanket reaffirmation of Western ideology, at the expense of millions of voices screaming in the darkness of a history ignored.

That is why I was so intrigued to hear Steve McQueen had turned his attention to the subject with 12 Years a Slave. McQueen, a black working-class director from London, was not only born to West Indian parents, but his back-catalogue includes films like Hunger (2008). Depicting the final days of IRA martyr Bobby Sands’ hunger strike, the movie demonstrated a fine understanding of systematic oppression, and the need to use any and all tactics to over-come it. The film had a stunning visual language, even among the grim brutality of Maze prison, but even more impressive were the vast expository dialogue scenes. Engaging, accessible and provocative, they demonstrated an underlying background of institutional inequality that has moulded McQueen’s cinematic semaphore.

12 Years a Slave continues in a similar vein, blending McQueen’s artist’s eye seamlessly with an unflinchingly savage account of American slavery. We see blood spray from a young woman’s back as she is mercilessly flogged, the bulging eyes of a man on the brink of being hanged, the terror of a child about to be torn from her mother in the name of business – all the while haunted by the fact that this is no Hostel-style invention from some ghastly Hollywood yuppie, but the recreation of a man’s real memoirs.

There are no tub-thumping speeches about liberty to reconcile this suffering with modern America either, no talk of individual strife; just talk of survival within a pitiless institutionalised inequality, which may well remind viewers of many of modern society’s own rifts. This is no longer the modern conjuring of black suffering into commodity then. This is a raw, untempered scream of anguish at the wrongs of the past, projected at the viewers, invoking us to learn from them – and put modern wrongs right. And after the credits role you will want to – because perhaps most cleverly the film leaves you feeling with a distinct lack of closure.

Solomon Northup (Chiwetel Ejiofor) spends the duration of the picture helpless. Unable to return to his family, or to prevent the horrors befalling those around him, he is dependent on appealing to a white saviour in the same way the protagonists of the Spielberg technique might be – but with an important difference. Here, cruelty and greed are not just the preserve of the odd pantomime villain – they are considered a necessary and natural part of life. As such, even the “slaver” sympathetic to Solomon cannot make an exception for him and end his incarceration!

William Ford (Benedict Cumberbatch) cannot concede Solomon might be anything more than an “exceptional nigger”, for the moment he accepts as much, who is to say any of the countless others labouring in his fields might not also be his equal? We glimpse, ever so briefly, the internal conflict of an oppressor’s dominant ideological outlook, as he observes the brutal truth of oppression; and it comes without any Ebenezer Scrooge conversion. Ford, whose perceived reality risks crumbling if he grants Solomon freedom, sells him on “for his own good” to an even more brutal “nigger breaker” named Epps (Michael Fassbender).

It is here we meet Patsey (Lupita Nyong’o), a young woman raped and beaten by her demented master. Her torment is unspeakable, yet Solomon ultimately cannot offer her salvation in any meaningful sense. We are left feeling empty; and clearly so is he. As you may have guessed from the fact this is based on Northup’s memoirs, he obtains his freedom – but is powerless to discontinue the suffering of those he has lived among for over a decade. He’s reunited with his family, he holds his grandson, he cries. Roll credits.

And in any other film that might have been the end – the individual has survived and achieved his goals; the system works, let’s go home. But it isn’t over. In the dying seconds, titles solemnly inform us his kidnappers evade justice thanks to the failings of the segregated legal system in Washington. Solomon subsequently joins the abolitionist movement, and aids escaped slaves on the Underground Railroad, before his ‘unexplained’ death. It is in this instant the film comes together.

The past year has been awash with big-budget slavery pictures, but none of them have really understood the subject like this. The key difference between the independently produced 12 Years a Slave, and its US studio-backed counterparts, is that whilst it comes saturated with glamorous names and a soul-stirring Hans Zimmer soundtrack, it never becomes a vanity project or attempts to manufacture impotent liberal guilt. It isn’t about making us feel good about ourselves, about sanctifying ‘visionary’ white law makers, or satisfying us that what’s right is ultimately obtainable by playing by the rules (à la Lincoln).

It is, from its very outset, a call to arms against the divisions of wealth, gender and race that live on in today’s world. In those final, fleeting moments of text, that becomes clear. Solomon finds that whilst his own liberty is assured, the system is rigged in a way that he cannot save people like Patsey, or prevent others from suffering the same fate. At this point, he chooses to act outside the law – but this action (which may relate to his mysterious death) is all unseen! It is implied, and as such, does not function as a satisfactory “pay-off” for us, sat safe in plush multiplexes, guzzling pop-corn and soft-drinks.

The Academy Awards might have wanted to appropriate this film to seem more inclusive, handing it a Best Picture prize and hoping we’d all be satisfied. Ultimately though, 12 Years a Slave can’t fulfil that hegemonic function, because it doesn’t leave us feeling contented or better about ourselves, like so many pigs feasting from some trough of human degradation. Instead we are left hungry for justice and inspired to fight for it. That’s what makes this one of the most compelling cinematic call to arms of the last decade.

This article was originally published in January 2014 by Norwich Film Festival.